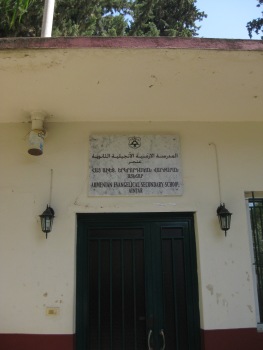 Not long ago I was the guest of Hagop and Nanor Akbasharian, a young Protestant pastor and his wife in the Lebanese town of Anjar. In addition to serving the local Armenian Evangelical community, they also are in charge of a day school with classes starting from kindergarten up to secondary school and a boarding school for those whose parents live too far away or can’t take good care of them. Most children in the school come from disadvantaged families.

During my research into Franz Werfel’s Musa Dagh story, I had heard about survivors of the Musa Dagh siege who had ended up in Anjar, but did not have the time to delve deeper into their history. The town was given to the Armenians of the Musa Dagh by the French colonial government in 1939. In that year, the region into which many had resettled after living in camps in Cairo and elsewhere, was taken by the Turks (see Vahram L. Shemmassian, ‘The Settlement of Musa Dagh Armenians in Anjar, Lebanon, 1939-1941’). Rather than awaiting what Turkish rule would bring this time, the inhabitants of six out of the seven villages took the offer from the French Mandate government to resettle in the area of Greater Syria. After some negiations, they were allowed to rebuild their villages in Anjar. Within this new city, the former villages were transformed into separate city neighborhoods. Their churches moved with the villagers, the Armenian Apostolic Church, the Armenian Catholic Church and the Armenian Evangelicals (originating in the Protestant missions of the nineteenth century). Today this church is part of the Union of the Armenian Evangelical Churches in the Near East. 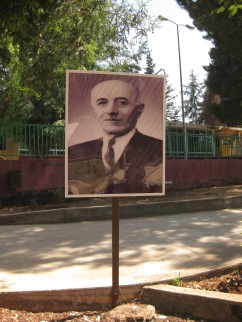 More than one would have guessed from Franz Werfel’s version of the story (whose focus is mostly  on the Orthodox Apostolic Armenians), the Protestants were and are an important part of the Musa Dagh resistance. Their pastor in 1915, Rev. Dikran Antressian (who appears under his own name, spelled as Dikran Andreasian in Werfel’s narrative), played a leading role in the defense of the mountain, alongside Moses Der Kaloustian (the leader of the revolt, transformed by Werfel into his hero Gabriel Bagradian). Rev. Antressian (b. 1888 in Yoğunoluk) died in Beirut in 1962 after a long life of service to the Armenian Evangelical community. In the year 2000, his remains were brought to Anjar, where a modest monument commemorates his work. (Note that the town also has a monument commemorating the ‘The 18 heroes who died during the Heroic Battle of Musa Dagh (Musaler)’.)

According to the people of Anjar, it was also Antressian (rather than Kaloustian/Bagradian) who came up with the idea of a banner on the mountain top, which, different from Werfel’s narrative, did not feature the words ‘Christen in Not, Hilfe!’ (Christians in need, Help!), but rather a huge red cross, referring in design and function to the symbol of the International Committee of the Red Cross (founded in 1863). According to Catherine Yesayan, the banner with the cross, made out of a bedsheet and red choir boy robes, is still kept in a house in Anjar.

While the banner with the red cross referred to the expressly secular Red Cross, the cross shape would, both for those putting it up and for those seeing it, imply that Christians were involved, thus making making clear what Werfel did by making a text out it that said ‘Help! Christians in Need!’. The interconnections between the various interpretations of the cross sign have been further amplified in today’s commemorations of the event. Now, the secular and the religious are merged by commemorating the successful rescue of the Musa Dagh survivors at the same day when the Orthodox Armenians celebrate the Finding of the True Cross on September 14th , the feast that commemorates how Helena, the mother of Constantine, discovered the remnants of the Cross in Jerusalem thereby locating the place where Christ’s crucifixion had taken place. In this way not only two chronologically and geographically widely apart events are brought together in Armenian self-understanding via the symbol of the cross, but also the Orthodox and the non-Orthodox Armenians (Evangelicals and Catholic). Or to put it differently: the resistance and final rescue of the Musa Dagh Armenians is interpreted as an event that is as much religious as it is national. 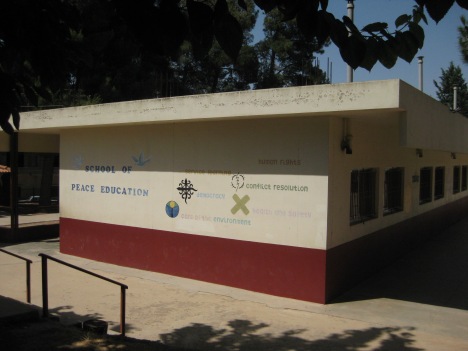 In Anjar, the Armenians have come a full circle: while on the one hand they are committed to keep the memory of both genocide and resistance alive, over the last couple of years they have also witnessed the arrival of survivors of new atrocities, located as Anjar is on the High way from Damascus to Beirut. The influx of refugees from Syria have made the town less of an Armenian town, but at the same time it has, again, become a place of refuge for those who need it today. The Armenian pastor and his wife contribute their share in alleviating the needs of the wider community, by caring for disadvantaged children of all ages, and by educating them in peace, solidarity and sustainability as well as in math and reading – as much as anyone can do to prevent new cycles of war and displacement.