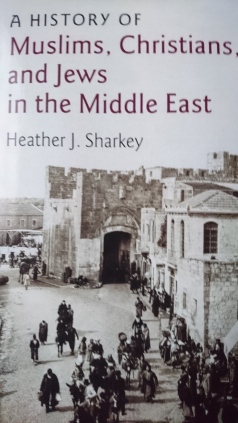 These days I was catching up on writing reviews. One book in particular stood out. If there was such a thing as the Middle Eastern minorities book of the year 2017, this would definitely be it. Heather Sharkey (University of Pennsylvania) succeeded in adding an indispensable volume to the many books that have been written about the Middle East and its religious communities in recent years: A History of Muslims, Christians and Jews in the Middle East (Cambridge University Press, 2017)

The increasing numbers of Christians leaving the Middle East, set against the background of the earlier exodus of Jews from most Middle Eastern countries on the one hand and the ongoing societal unrest and civil war on the other, have greatly increased the interest in the region and in its religious make up. In response to these developments, Sharkey has written an overview of the complicated history of the three major religious groups whose mutual relationships are often seen as the most important element of Middle Eastern history. Rather than treating ‘Jews and Christians’ as special group in relation to the politically dominant ‘Islam’ (as most overviews tend to do), she chose to write about the relations between these three groups, moving back and forth between majority and minority perspectives, up until the early twentieth century.

In this reference work, Sharkey crafts her own distinctive approach that is convincing from the start. Rather than trying to discuss all centuries since the rise of Islam in equal measure, she takes the Ottoman period as the center of her book, moving backwards when there is need for historical depth (like, e.g., in explaining the concept of the ‘people of the book’ – one of the best introductions into the subject I’m aware of). She therefore can pay due attention to the long nineteenth century, showing how during this century in which the Ottoman Empire entered its great era of reform under internal and external pressures, as a result of which also the relationships between these three groups changed fundamentally. Another distinct trait is her consistent use of material culture as an important source for understanding mutual relationships, in ongoing conviviality and shared cultural practices as well as in the myriad distinctions, prescribed from above or developed from below.  (Of course, this approach has become very common nowadays in specialist works, upon which she bases much of her analysis, but so far has not been integrated in a general work such as this). Finally, the book is as didactic as possible without being in the least condescending, discussing definitions and concepts in a way that makes the book well suited for newcomers in the field while encouraging the specialists to rethink what they thought they knew.

All of this resulted in a book that is more precise and much more nuanced than what was available so far, sketching the historic foundations of the parameters that until today govern the discussions over the Middle East and indeed, over religious conviviality, rivalry and violence. A great read and highly recommended!

(A more extensive version of this review will be published in the upcoming issue of The Journal of Eastern Christian Studies (2018, 1-2).)